Bitcoin transactions (tx) are the double-entry exchanges that get recorded into the blockchain ledger. They are the instruments where we exchange bitcoin units from public address to public address. They contain the amounts exchanged, the source and destination of the funds, a proof for authenticating the owners of the funds and a locking mechanism to make sure that only the destination of the funds will be able to make use of them. Transactions are generated at a pace that currently oscillates between 150.000 per day and 500.000 per day.

For every one of these transactions [i] , if we go to the lowest reasonable level, it is an electrical signal that is coded into a string of bits. Since we humans have a tough time reading bits – ones and zeros – we typically encode this bit stream into hexadecimal values, where we group bits in packs of four and we assign every possible combination a sign

We use numbers from 0 to 9 (10 numbers) and letter from A to F (six letters) as the signs that can represent the 16 possible different values that 4 bits can take. In fact, we will find indistinctively our letter written in upper case (A to F) or lower case (a to f) so for our purpose whether we write “A” or “a” it will represent the following four bits “1010”

and read all the bits that it contains and encode it in hexadecimal, we will find something like this

This transaction (tx for short) was taken from here [ii] . How did we get the transaction content? From a full index node with the following command

Well, this is slightly more clear than a succession of “0”s and “1”s but not really much. If we use a transaction-decoding program, we would get the following response 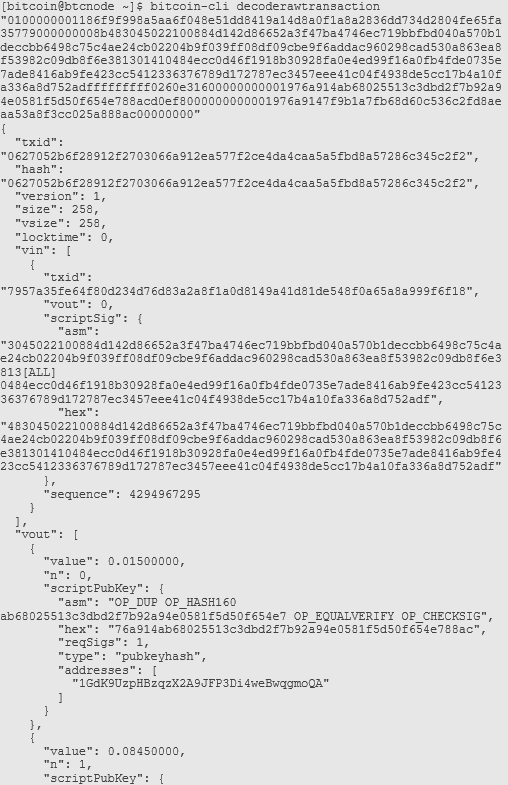 Well, now we are talking a little bit clearer, as we can distinctively see

However, how did the decoding tool make the transition between hexadecimal values (“hex” for short) and the different fields? Are there any other fields that the tool has decided not to show? After all, even using the decoding tool we still see hex values. Are all fields present in the transaction or are some of them calculated by the decoder tool? Answering all these questions is the purpose of this article.

Here is the first, and very important, concept. Bitcoins reside on the blockchain, and they are publicly available for scrutiny. They are recorded in the txout, assigned to a public key. Hence, our wallets do not contain bitcoins per se; they contain the private keys associated to the public keys to which the bitcoins in the blockchain were assigned. Hence the importance of understanding what do transactions look like, because they contain our bitcoins.

And you can see that every transaction has got a fee – that is not written into any transaction field but is calculated as the difference between the input values and the output values – . These differences are not “lost” into the Blockchain but they appear as claimed in the Coinbase transaction by the miner that includes the transaction into his mined block.

If we take a closer look at how transactions are chained, we will see that in addition to having a “block of chains” we also have a chain of transactions. More specifically, each new transaction links its txins to previous transactions

In this simplified schema, we have “painted” four blocks, each containing a set of transactions. The blocks are chained sequentially, but transactions (txouts -> txins) are chained not necessarily sequentially. There can be gaps either by leaving unexpended txouts in older blocks, or by txouts that are linked to txins several blocks later.

So we see that transactions are chained but in a different way as blocks. Block chaining is linear and sequential, and block N is followed always by block N+1. Transactions on the other hand can include multiple inputs that refer to multiple outputs existing in multiple previous transactions. It is, to some extent, meshed.

Let us get a closer look at the structure of a transaction. They are, from a general point of view, built as a concatenation of

We calculate the sha256d we should get its txid

One specific aspect of the sah256d calculation and encoding of the results is that when we get displayed the result it gets byte inverted, or otherwise said; the result is RPC-byte-ordered. To give you an idea of what “RPC-byte-ordered” is, let us look at a double sha256 on a simple 0x00 value

If we invert byte by byte, we get the following value

Therefore, in order to byte invert the result we take every two hex values, pair by pair, and we swap positions the first (14) with the last (9a), the second pair (06) with the pair before the last (53), and so on.

If we invert the order of every pair of bytes, bingo, we’d get to our txid, or

Here is a snippet of python code, taken from here [iv], that allows you to check what the “internal byte order” and the “RPC byte order” look like

Drawing transactions with a little bit more detail, we obtain the following schema 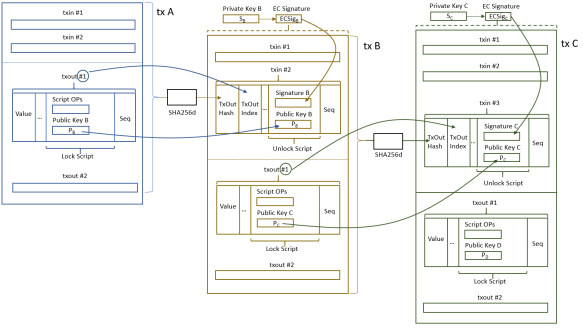 If we want to be a really specific, we can identify (all values in columns “In Our Example” are hexadecimal, unless otherwise stated) 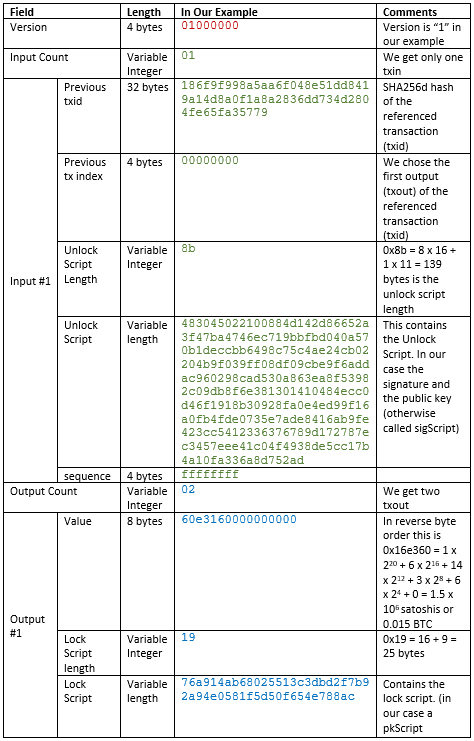 Let us walk through some of these fields

The Version field are 4 bytes, encoded in little-endian. In our example we are getting a version “1”, as the least significant byte show first and is “01”, and the rest of the bytes are set to 0

After the version field, we get a number of “txin”. Let us see in our example how they are encoded (all values in columns “In Our Example” are hexadecimal, unless otherwise stated)

The signature is encoded in DER format [v]  and  [vi]

How did we find the correct format of the UnlockingScript? Well, the Lock Script contained in the txout we are referencing forced this. We are free to put any Unlocking Script here, but if we want it to be valid, then it has to match what was asked at TxOutIndex (0) of the RPC byte ordered content on TxOutHash (that content being)

so we should look for txid

So yes, we needed to push a correct Elliptic Curve Signature and the correct public key whose bitcoin address is 1Cdid9KFAaatwczBwBttQcwXYCpvK8h7FK. This is what our txin did.

R and S contain a valid Elliptic Curve signature. We are not going to enter into the mathematics of it, but what content do we exactly sign? The signature Hash Type (or SIGHASH flag) has the answer

This brings some important points

Why would you want to do that? Well, someone is sending you BTCs through transaction A, and somehow a node replaces it with transaction B before transaction A is mined, and succeeds to mine tx B, that makes tx A invalid from that moment on (as it would be trying to spend an txout that has already been spent by transaction B). You would still be receiving your BTCs, but you could tell that someone that his transaction A failed and that he/she should create a new transaction C and try again sending you some BTCs again. Unless that someone checks that his tx A was not just failed but replaced by a successful tx B, you might be able to fool him/her to send you some BTC again. It is twisted but it is possible.

Coming back to the signature, there is a whole set of steps to take to perform the signature. If you want the details, you can find them here [vii] and here [viii] but in a few words, for each txin that needs to include a signature, and its associated previous txout

To finish with this topic, let us see what all 6 SigHash Types mean

After all the txin have been encoded, it is the turn of txout. Let us see in our example how they are encoded 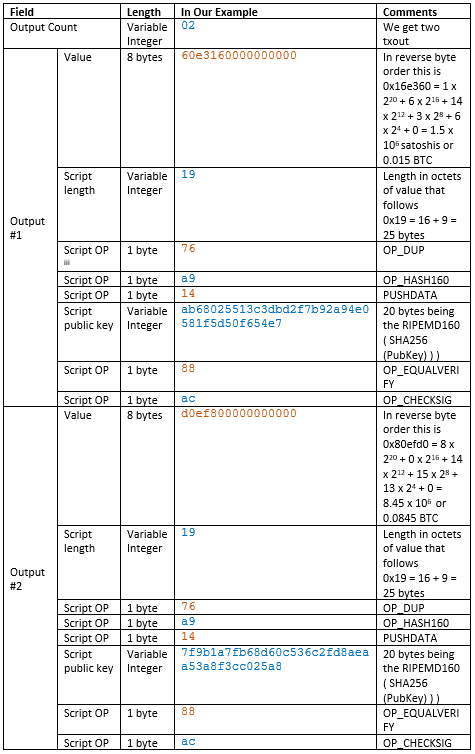 Coinbase transactions have a special type of txin, as they generate bitcoins by themselves, and they are not bringing them from an existing previous txout. In that case

Segwit is a completely new way of construction transactions that goes beyond the scope of this article. It brings modifications to the transaction structure. Stay tuned for more news.

This article was written by ignacio. You can contact him at admin@privatekeys.org